Primary School Teacher New Job Circular 2016. The primary and mass education ministry has  finalized  the decision to appoint 28000 teachers  in registered primary schools from the panel list . They will be appointed as an assistant teacher in govt primary schools. 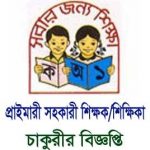 From a trustworthy clue, it is said that to appoint in those vacant posts, the formal letter has issued to primary education department’s DG. The sources from ministry inform that the copy of this letter is also sending to the district commissioner and district primary education officer. The listed teachers are very happy with this decision.The source of primary and mass education ministry has said that to appoint  assistant teachers to the vacant post of  registered non-govt primary school, govt issued a circular on 11th April in 2011. The test was held on 9th April 2012. Those who qualify in total 42611 persons are included in the panel list. Among them, 14000 has given appointment by the govt. Though it is declared that all are going to be appointed, but later the appointment was stopped after the nationalization of the non-govt primary schools in 2013.

Later Mr. Shafiqul Isalm of Nouga and more 10 who are in the panel but appointment deprived were prayed for a writ in High Court . In the final hearing of that writ on 18th June of that year, the court has a verdict to give appointment of those 10 people.  Primary and mass education ministry appealed against the verdict while the appellate division has dismissed the appeal prayer. After that, the ministry has issued a letter to the district commissioner and district primary education officer to appoint those teachers . Among those 10, one has passed away and 7 has joined to the job.

Besides, there are more that 300 writs regarding these and all decision of court were gone to the favor of  the panel listed persons.