Based on that Education ministry has issued the comprehensive admission guideline in which like last year the admission will be based on the result of the secondary school certificate (SSC) examination. Here we have to see all educational information. 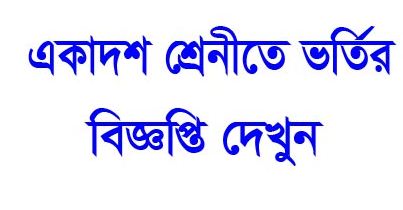 In the guideline, it is also said that every institute compulsorily admits student through online. Through the SMS of Teletalk mobile, applicants can apply.  Through online and SMS of Teletalk mobile, the applicant can apply from 26th May to 9th June. On 16th June, the result of the selected candidates will be published and without late fee, from 18th June to 30th June , the candidates can get admission. With the late fee, the selected candidates can get admission from 10th July to 20th July.

In the guideline, it is also stated that by depositing 150 Taka fee, one can apply for 10 colleges. But one person can apply once only. If someone wish to apply by SMS, he has to pay 120 taka fee.

Any institute can fix the minimum qualification to get admission in that institute.89% of seats in divisional colleges will be open for all. The rest 11% seats will be distributed as follows

3% the candidate of the out site of the related division

2%  for the children of the staff of education ministry and its related institutions and the members of the board of directors.

In a rural area or in Upazila level the fee will be 1000 Taka including  session charge and for district level and metropolitan except Dhaka, the charge will be 2000 Taka and 3000 Taka consecutively.

In Dhaka metropolitan area the institutions those are included in MPOs cannot take admission charge more than 5000 Taka.

According to the guideline, no institute can take more than 3000 Taka as development fee. Last of all you can get HSC College Admission Result 2016.